BACKGROUND: Pembrolizumab, an immune checkpoint inhibitor, is approved by the US Food and Drug Administration as a treatment option for several cancers, including metastatic or unresectable melanoma, non–small-cell lung cancer, bladder cancer, and head and neck carcinoma.

DISCUSSION: We discuss a case of an 86-year-old male patient with metastatic melanoma who developed myositis secondary to initiating pembrolizumab therapy. To our knowledge, this is the second reported case of myositis resulting from pembrolizumab. The patient received 2 cycles of therapy at 2 mg/kg and developed dysphagia and hoarseness 1 week later for which he was admitted to the hospital for further evaluation. After a complicated hospital course, steroid therapy, and plasma exchange, the patient failed to respond, aspirated, and died. We also review other cases of immune-mediated myositis reported in the literature.

CONCLUSION: Several immune-mediated adverse events, including myopathies, have been associated with immune checkpoint inhibitors, including programmed-cell death-1 and cytotoxic T-lymphocyte–associated protein-4 inhibitors. Adverse events often respond to discontinuation of therapy and initiating steroids. Tumor necrosis factor–alpha inhibitors and plasma exchange may be used for severe, unresponsive cases. Clinicians should be vigilant with such events and initiate therapeutic interventions rapidly to optimize patient safety and outcomes.

Immune checkpoint inhibitors, including programmed-cell death (PD)-1 and cytotoxic T-lymphocyte–associated protein (CTLA)-4 inhibitors, have proved to be effective in treating many cancers, but in rare cases, have been reported to cause fatal and life-threatening immune-mediated adverse events (AEs). The primary mechanism of action of these agents results in the activation of the immune system against cancer and has thus shown promising results in various tumor types. However, activation of cellular immunity has been associated with common complications of peripheral edema, fatigue, pruritus, skin rash, elevation in liver enzyme levels, and other endocrine, gastrointestinal, and hematologic events.1,2

Fatal immune-mediated AEs are often derived from case reports, and the onset ranges from a single administration to several months of therapy.1,3,4 Treatment of immune-mediated AEs generally includes treatment interruption and systemic or topical steroids. Anti–tumor necrosis factor–alpha agents and plasma exchange (PLEX) are generally reserved for patients whose disease fails to respond to steroid therapy.5-10

Immune-mediated myositis has been reported in less than 1% of patients receiving immune checkpoint inhibitors.5-10 We report a case of an 86-year-old male patient with metastatic melanoma who had myositis of the head and neck after receiving 2 doses of pembroliz­umab therapy.

An 86-year-old Caucasian male patient, diagnosed with metastatic melanoma, presented to our clinic with dysphagia, hoarseness, and myositis after receiving 2 cycles of pembrolizumab. His medical history was significant for atrial fibrillation, for which he received apixaban, amiodarone, and propafenone. His other home medications included acetaminophen, atorvastatin, moisturizing eye drops, and fluoride toothpaste.

The patient was initially diagnosed in 2012 with melanoma involving the back, for which he underwent Mohs surgery with negative margins. In 2016, a biopsy was obtained for an enlarged parotid gland, which revealed malignant disease. A right total parotidectomy with facial nerve preservation and select right lymph node dissection was performed in June 2016.

Postresection, the patient received adjuvant radiation therapy to the right neck and parotid, for a total dose of 6600 cGy in 30 fractions from July 2016 through September 2016. One month postradiation, adjuvant pembrolizumab therapy was initiated at 2 mg/kg intravenously every 3 weeks.

The patient tolerated cycle 1 of therapy well without any complications. Approximately 1 week later, starting with the second cycle, he presented to his outpatient provider complaining of dysphagia and hoarseness over several days. A magnetic resonance imaging scan of the brain, head, and neck did not show any evidence of metastases or any acute findings.

Video swallow studies demonstrated very poor swallowing function, with severe oropharyngeal dysphagia. Apart from severe oropharyngeal dysphagia and hoarseness, the patient denied any headache, visual disturbances, nausea and vomiting, or any other focal neurological deficits. At the time of presentation, his creatine phosphokinase was normal (ie, 180 U/L). The patient was admitted to the hospital for further evaluation.

After consultation with an otolaryngologist, a comprehensive examination of the patient’s upper airway was performed using flexible fiberoptic nasal laryngoscopy and no clear abnormalities were observed. A neurology consultation was ordered to evaluate for any central nerve involvement. The electromyography examination showed myopathic changes, with fibrillations, suggestive of proximal, bulbar myopathy with electrophysiological correlates of myonecrosis, fiber splitting, or vacuolization. A muscle biopsy was performed for further evaluation of the splenius capitis and send-out laboratory tests included a MyoMarker Panel 3, acetylcholine receptor (AChR) antibodies, and hydroxymethylglutaryl-CoA synthase antibodies to rule out myasthenia gravis or stat­in-induced rhabdomyolysis. He had been taking atorvastatin for years without any complaints.

Biopsy results confirmed necrotizing myositis with the presence of mononuclear cells scattered in the peri­mysium and some fascicles of the muscle fibers were invaded by macrophages. The patient’s exposure to pembrolizumab was believed to have resulted in necrotizing myopathy. The observed inflammatory changes were likely secondary to the muscle fiber injury.

Treatment with PLEX was recommended for our patient, and he received a total of 5 sessions. He tolerated the treatment well; however, his dysphagia did not improve. He also received a 3-day course of intravenous (IV) methylprednisolone 1000 mg daily. Subsequently, he had a nasogastric tube inserted to provide nutritional support with tube feeding.

A day later, nursing staff noted he had an episode of emesis and vigorous coughing, which resulted in a code call for the rapid response team. Because of concerns for aspiration, a chest x-ray was obtained, which revealed a new left lower-lobe infiltrate. He started treatment with IV antibiotics and was transferred to the intensive care unit (ICU) for further care. In the ICU, his systolic blood pressure measures were ranging in the 50s mm Hg and his blood pressure was resistant to phenylephrine boluses. His treatment was escalated to a combination of vasopressin, norepinephrine, and epinephrine drip, but he remained hypotensive. The care team initiated a discussion with the patient and his family regarding goals of care. The following morning, the patient died.

Cancer immunotherapies have demonstrated positive outcomes in the treatment of many cancers, and their use continues to expand.11 Despite their clinical efficacy, immune-mediated AEs have led to increased morbidity and mortality. Immunosuppression and T-cell inhibition results when PD-1, an immune checkpoint receptor, binds to its ligands PD-L1 and PD-L2, leading to tumor growth.2,12

Immune checkpoint inhibitors activate cellular immunity against cancer cells; however, their novel mechanism of action also affects normal host tissues leading to immune-mediated AEs.7,13 PD-1 inhibitor–induced myositis has been reported in less than 1% of patients. A summary of these cases is provided in Table 1.5-10 Myositis is defined as an idiopathic inflammatory myopathy and can further be subcategorized as dermatomyositis, inclusion-body myositis, juvenile myositis, and polymyositis. These diseases are poorly understood and do not always completely respond to current medications, because of the rarity of the disorders, complex clinical phenotypes, and the limited number of clinical trials. The exact mechanism of PD-1–induced myositis remains unclear; however, several of the published case reports outline different mechanisms or patients with increased risk for complications.5-10 One report proposed that patients with elevated antistriated muscle antibody titer who receive immune checkpoint inhibitors may be at an increased risk for rhabdomyolysis and polymyositis.5 The patient in that case report had acute rhabdomyolysis associated with severe polymyositis after 2 cycles of nivolumab.5 Pretreatment, the patient’s antistriated muscle antibody titer was already elevated, at 1:15360, and upon presentation, it was elevated to 1:61440. The authors conclude that PD-1 inhibitors may exacerbate autoimmune conditions in patients with elevations in antistriated muscle antibody titer.5

Another report describes that subclinical anti-AChR antibody in patients receiving immune checkpoint inhibitors could be a prediction tool to avoid myasthenic crisis and myositis.6 PD-1 inhibition resulted in increased anti-AChR antibody and several cytotoxic T-lymphocyte clonotypes in their patient during his treatment period and decreased upon treatment discontinuation.6 This is further supported by a case of myasthenia gravis in a patient with low anti-AChR antibody who was initiated therapy with nivolumab.17 Disruption in immune tolerance leading to autoimmunity may also result from immune checkpoint blockade and may be exacerbated by aging immune systems in the elderly population.3,10 This was hypothesized in the case of an 86-year-old female patient who had necrotic myositis secondary to pembroliz­umab.10 In this case, myasthenia gravis autoantibodies were all normal, which included anti-AChR.10

To date, the role of these antibodies in drug-induced myositis is not clear, and at times, patients present with normal values as discussed above. However, these values have an established role in diagnosing myasthenia gravis. Three types of AChR antibodies exist and are classified as binding, blocking, and modulating.18-21

Because myositis is classified as an idiopathic inflammatory myopathy, treatment approaches focus on managing such inflammation. Defining the optimal treatment regimens for these disorders has been difficult, because of the rarity and complexity of these disorders. The main goals of treatment are enhancing muscle strength and avoiding the development of extramuscular complications. Although a standard regimen has not yet been established, steroids have been shown to improve strength, preserve muscle function, and normalize serum enzymes.23,24 For patients who do not respond to steroids or those who may not achieve a desirable response, azathioprine and methotrexate may be used, but the data are limited, and the response rates may not be seen for several months.23,25,26

Other therapeutic modalities include PLEX, which aims to decrease circulating levels of autoantibodies and immune complexes and has been shown to be successful.5,6,10 This has conflicting responses in case reports, and the number of sessions and frequency is not established.5,6,10,27 In one report, infliximab demonstrated positive results but it was used in combination with steroids.5

To evaluate the likelihood of pembrolizumab-induced myositis, we used the Naranjo Adverse Drug Reaction Probability Scale for causality assessment (Table 2).28 Using the provided metric in Table 2, we concluded that pembrolizumab was the probable cause (total score, 6) of drug-induced myositis in our patient. Although postoperative radiation therapy could have contributed to some of our patient’s symptoms, we concluded that this was unlikely, because of the biopsy-confirmed diagnosis and the lack of surrounding muscular involvement. In addition, the onset of disease, supporting published evidence, and lack of changes in the patient’s medication profile, strongly suggest that this was the reason for the myositis. Pembrolizumab, in addition to other PD-1 inhibitors, has been associated with drug-induced myositis. Although rare, prompt diagnosis and treatment are necessary to prevent morbidity and mortality. In several reported cases, patients have shown a response to systemic therapy with corticosteroids and PLEX. In some patients, myasthenia gravis antibodies may be present, but deciphering the clinical meaning of these laboratory results remains a challenge in drug-induced myositis. It is unclear which patients may be at increased risk for these complications, but prompt management with steroids should be the initial treatment, and combined treatment modalities may benefit serious cases. Clinicians should be aware of these rare but serious immune-mediated AEs. With the increasing use of immunotherapies and the advent of newer agents, case reports will aid in the identification, management, and diagnosis of immune-mediated reactions.

Dr Hanna is on the Advisory Boards and received funding from Takeda Oncology, Taiho Pharmaceuticals, Heron Therapeutics, and Amgen; is on the Speaker’s Bureau of Seattle Genetics; and is a Consultant for Hyloris Pharmaceuticals. 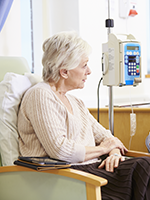 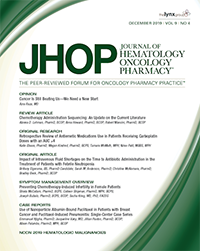