Lung cancer is one of the most common cancers in men and women, and is the leading cause of cancer-related mortality in the United States.1 According to the American Cancer Society, more than 155,000 Americans will die from lung cancer in 2017, representing approximately 25% of all cancer deaths.1 Non–small-cell lung cancer (NSCLC), the most common form of the disease, accounts for 80% to 85% of all lung cancer cases.2

Among US patients with advanced NSCLC, approximately 10% have EGFR mutations,3 approximately 23% have KRAS mutations,4 and up to 13% have ALK mutations.5 By identifying these mutations, oncologists can determine which patients can benefit from available targeted therapies.

Crizotinib (Xalkori) was the first tyrosine kinase inhibitor (TKI) and alectinib (Alecensa) was the second TKI approved by the US Food and Drug Administration (FDA) for patients with advanced ALK-positive NSCLC.6,7 Although many patients with ALK-rearranged NSCLC respond to a TKI, the resistance rate is high within 1 to 2 years.8 Unlike crizotinib, which does not cross into the brain to target tumors in the central nervous system (CNS),9 alectinib has been shown to have “an effect on tumors that have spread to the brain.”7 Still, additional treatment options for ALK inhibition are needed that can cross the blood–brain barrier.

On April 28, 2017, the FDA accelerated the approval of brigatinib (Alunbrig; Takeda Oncology), a new-generation oral ALK inhibitor, for the treatment of patients with ALK-positive metastatic NSCLC who do not tolerate or have had an inadequate response to crizotinib.10,11

The FDA’s approval of brigatinib was based on overall response rate (ORR) data from the noncomparative clinical trial called ALTA.10,12

Commenting on the study results, David Ross Camidge, MD, PhD, Director of Thoracic Oncology, School of Medicine, University of Colorado Denver, noted that brigatinib “was highly effective post-crizotinib….Importantly, the extent of activity among those with brain metastases was also notable.”11

Continued approval of brigatinib is contingent on results of a confirmatory trial. Brigatinib was also granted a breakthrough therapy and an orphan drug designation.10

Brigatinib is a TKI active against multiple kinases, including ALK, ROS1, FLT3, and insulinlike growth factor-1 receptor, as well as EGFR deletion and point mutations. At clinically achievable concentrations in vitro, brigatinib alters the viability of cells that are resistant to ALK inhibitors.13

The recommended dose of brigatinib is 90 mg once daily, taken orally, for 7 days. If the drug is tolerated, the dose is then increased to 180 mg once daily orally, and used until disease progression or unacceptable toxicity. Brigatinib can be taken with or without food.13

The efficacy of brigatinib was evaluated in ALTA, a 2-arm, open-label, multicenter clinical trial of 222 adults with locally advanced or metastatic ALK-positive NSCLC whose disease progressed while using crizotinib.12,13 Patients with CNS metastases who were neurologically stable were eligible for this trial; patients who had received crizotinib within 3 days of the first dose of brigatinib were excluded. The primary efficacy measure was ORR based on Response Evaluation Criteria in Solid Tumors (RECIST) v1.1, and was evaluated by an Independent Review Committee.12

The Table summarizes the response rate and duration of response to brigatinib.13 Among the patients with brain metastases at baseline, 67% of those receiving the 180-mg once-daily dose had intracranial (partial) responses lasting a median of 5.6 months.12,13 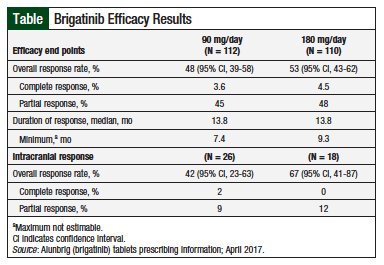 The safety and tolerability of brigatinib were assessed in 219 patients in the ALTA study.

Brigatinib has been associated with 8 deaths in the ALTA study, including 2 patients from pneumonia, and 1 patient, each, from bacterial meningitis, dyspnea, respiratory failure, pulmonary embolism, sudden death, and urosepsis.12,13

Brigatinib has no contraindications.13

Brigatinib has been associated with severe and fatal pulmonary events consistent with interstitial lung disease and pneumonitis.13

Hypertension and bradycardia have also been reported with brigatinib. Blood pressure and heart rate should be monitored during therapy.13

Visual disturbances can occur with brigatinib.13

Because of the risk for creatinine phosphokinase elevation, patients should be monitored while taking brigatinib.13

Elevated lipase and amylase levels, as well as new or worsening hyperglycemia, can occur; monitor patients for these reactions.13