Methods: PREVAIL was a multinational, double- blind, placebo-controlled, phase 3 clinical trial. Between September 2010 and September 2012, PREVAIL included 1717 chemotherapy-naïve patients with asymptomatic or with mildly symptomatic mCRPC that progressed with androgen deprivation therapy. The patients were randomly assigned to receive 160 mg daily of enzalutamide (N = 872) or placebo (N = 845); 1715 patients received at least 1 dose of a study drug. The coprimary end points were radiographic progression-free survival (PFS) and overall survival (OS). The secondary end points included the time until initiation of cytotoxic chemotherapy, the time until first skeletal-related event, the best overall soft-tissue response, the time until prostate-specific antigen (PSA) progression, and a decline in PSA of ≥50% from baseline.

Results: Enzalutamide significantly reduced the risks for radiographic progression of disease and improved OS. The study was stopped after a planned interim analysis which was conducted when 540 deaths had been reported–showed a benefit of the active treatment.

The findings showed an 81% reduction in the risk for radiographic progression in the enzalutamide group (hazard ratio [HR], 0.19; P <.001). At the planned interim analysis of OS, the median follow-up time was approximately 22 months. Treatment with enzalutamide compared with placebo resulted in a 29% decrease in the risk of death (HR, 0.71; P <.001). The median OS was an estimated 32.4 months in the enzalutamide group and 30.2 months in the placebo group.

The benefit of enzalutamide was shown with respect to all of the secondary end points. For example, in patients with measurable soft-tissue disease, 59% of the patients receiving enzalutamide (20% of whom achieved complete response and 39% of whom achieved partial response) versus only 5% of patients in the placebo group had an objective response (P <.001). The researchers found that enzalutamide delayed the median time to chemotherapy initiation by 17 months; patients receiving enzalutamide did not need to initiate chemotherapy until a median of 28 months versus 10.8 months in the placebo arm (HR, 0.35; P <.001).

In this phase 3 clinical trial, enzalutamide provided a clinically meaningful benefit for men with mCRPC when factoring in its reduced risk of radiographic progression of disease, improved OS, delayed initiation of chemotherapy, and excellent side-effect profile.

Enzalutamide was approved August 31, 2012, for the treatment of metastatic prostate cancer in patients who had previously received docetaxel. Beer and colleagues report their results in patients with metastatic disease who have not been previously treated with chemotherapy. The results were very impressive in that not only did survival improve, but the objective responses improved as well. For example, complete tumor shrinkage and partial tumor shrinkage were significantly better with enzalutamide than with placebo. This is a major advance in the treatment of metastatic prostate cancer, with enzalutamide delaying the use of systemic chemotherapy while increasing the duration of a patient’s quality of life. This orally administered drug appears to be comparable, if not preferable, to the use of abiraterone, which necessitates the use of the systemic corticosteroid prednisone and its attendant adverse effects. Enzalutamide was very well tolerated and did not produce any extraordinary side effects.

The package insert for enzalutamide warns of significant drug interactions and recommends that the coadministration of enzalutamide with strong cytochrome (CY)P3A4 and CYP2CB inducers be avoided if possible.

Background: A head-to-head randomized study compared 2 recently approved therapies, ibrutinib and ofatumumab, for the second-line treatment of patients with relapsed or refractory chronic lymphocytic leukemia (CLL) or with small lymphocytic lymphoma (SLL). Ibrutinib is a first-in-class, oral covalent inhibitor of Bruton’s tyrosine kinase, whereas ofatumumab is a monoclonal antibody that binds to the CD20 antigen on the CLL or SLL cells.

Methods: In RESONATE, a multicenter, open-label, phase 3 clinical trial, 391 patients with relapsed or refractory CLL or SLL in whom ≥1 therapies had failed were randomized in a 1:1 ratio to receive ibrutinib (N = 195) 420 mg once daily or ofatumumab (N = 196) 300 mg intravenously at week 1, followed by 2000 mg weekly for 7 weeks and then every 4 weeks for 16 weeks. The primary end point was progression-free survival (PFS), with secondary end points evaluating overall survival (OS) and response rate. The median follow-up time was 9.4 months.

These results support ibrutinib as an effective single-agent therapy for difficult-to-treat patients with CLL or SLL given its positive effect on PFS, OS, and response rate. The improvement in survival was observed across all subgroups that were examined. Phase 3 trials examining the effect of ibrutinib in patients with previously untreated CLL or SLL are ongoing.

Methods: From February 2010 to July 2012, researchers enrolled patients aged ≥18 years with chemotherapy- refractory mCRC, an Eastern Cooperative Oncology Group performance status of ≤2, and wild-type KRAS exon 2 status. Of the 1010 patients enrolled, 999 began receiving the study treatment. Patients were randomized in a 1:1 ratio to receive panitumumab (N = 499) 6 mg/kg intravenously once every 2 weeks or cetuximab (N = 500) 400 mg/m2 intravenously followed by 250 mg/m2 weekly. The primary end point was OS. Noninferiority was determined if panitumumab preserved ≥50% of cetuximab’s OS effect compared with best supportive care. The median durations of treatment were 14.3 weeks for panitumumab and 14.1 weeks for cetuximab.

The incidence of adverse events of any grade was consistent across the treatment groups. Serious adverse events were reported in 30% of patients in the panitumumab group and in 34% of patients in the cetuximab group, with 35% and 36% of patients, respectively, needing dose reductions as a result of adverse events. Grade 3 or 4 skin toxicity was more common with panitumumab than with cetuximab (13% vs 10%, respectively), as was hypomagnesemia (7% vs 3%, respectively). However, infusion reactions were more common with cetuximab than with panitumumab (2% vs <0.5%, respectively). Considering the consistencies of efficacy and toxicity that were observed, small but meaningful differences in the rate of grade 3 or 4 infusion reactions and the differences in dose scheduling can guide clinician choice of anti-EGFR therapy for this patient population, concluded the researchers.

This is the first comparative trial of 2 first-line targeted agents, panitumumab and cetuximab, in patients with chemotherapy-refractory wild-type KRAS exon 2 mCRC. The response rates, OS, PFS, and toxicities are almost identical between these 2 agents. So, which drug is preferable? Factors that may affect drug selection include the drug cost, insurance coverage, time spent in the clinic receiving therapy, and convenience.

With regard to drug cost, the average wholesale price of panitumumab is $38,900 for 420 mg (average weight, 70 kg), administered every 2 weeks; the average wholesale price of cetuximab is $26,531 for 680 mg, followed by 425 mg (average body surface area, 1.7 m2), administered weekly for 14 weeks. Cetuximab would require twice as many clinic visits as well as twice the cost for supplies and nursing care, thus making it more inconvenient for the patient. Medicare and private insurance beneficiaries are likely to have access to either drug, whereas patients with limited insurance may opt for a less expensive treatment.

The discussion by the study’s authors and the accompanying editorial in the same issue by Waddell1 bring up the topic of known resistance to EGFR inhibitors in patients with KRAS exon 2, 3, and 4 mutations. This study evaluated patient tumors for only exon 2 mutations, but not exon 3 and 4 mutations. Therefore, the results of this study are somewhat blurred by the lack of important biomarker data. At this time, the selection of 1 of these EGFR inhibitors may be made on the basis of the factors mentioned above, as well as on physician and patient preferences. 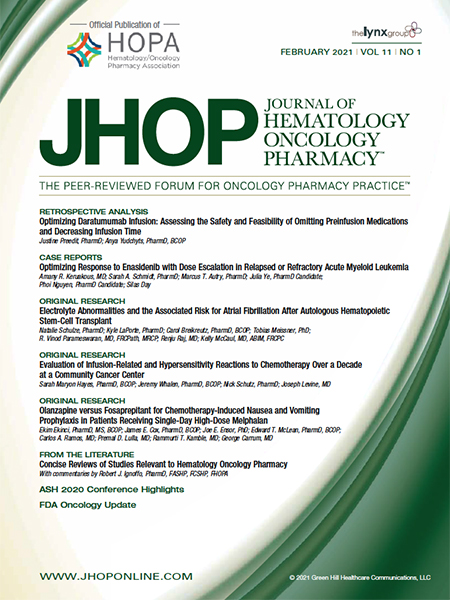