BACKGROUND: Pemetrexed is a cytotoxic agent frequently used for the treatment of advanced or metastatic nonsquamous non–small-cell lung cancer (NSCLC). As experience with this agent increases, so does the need to monitor patients continually for less-common adverse events.

OBJECTIVE: To present the use of maintenance pemetrexed therapy in a man with stage IV NSCLC who had a unique adverse event of facial edema preceding acute renal injury.

DISCUSSION: The patient had stage IV metastatic NSCLC and received carboplatin, pemetrexed, and bevacizumab, as well as supportive care medications of dexamethasone, vitamin B12, and folic acid. After complete response to this regimen, the patient received pemetrexed maintenance therapy. During treatment cycle 19, the patient had new generalized facial edema and mild renal insufficiency. After permanently discontinuing pemetrexed therapy, his kidney function was restored to baseline.

CONCLUSION: Because the use of pemetrexed maintenance therapy is increasing, healthcare providers must be aware of the potential for uncommon postmarketing adverse events. This case report demonstrates the importance of monitoring for facial edema, which could be an early indicator of the onset of acute kidney injury.

Pemetrexed is a folate analog metabolic inhibitor that results in the disruption of the folate-dependent processes necessary for DNA synthesis.1 The use of pemetrexed is increasing as a result of its Category 1 preferred recommendation by the National Comprehensive Cancer Network for systemic therapy in advanced or metastatic nonsquamous non–small-cell lung cancer (NSCLC).2 The US Food and Drug Administration (FDA)-approved dosing of pemetrexed for the treatment of nonsquamous NSCLC is 500 mg/m2.1

The common side effects of pemetrexed include fatigue, skin rash, gastrointestinal upset, and myelosuppression. Less-common severe side effects include nephrotoxicity, pulmonary toxicity, and hypersensitivity.1 Patients are routinely given folic acid and vitamin B12 1 week before treatment with pemetrexed and during pemetrexed therapy to prevent hematologic adverse events. In addition, starting the day before receiving pemetrexed therapy, patients receive dexamethasone for 3 days to minimize potential cutaneous reactions.1

Bastos and colleagues described a series of 7 case reports of pemetrexed-induced edema.11 Of these 7 cases, 2 patients had generalized edema, which included peripheral edema and facial edema.11 Similar to our case, Chauvet and colleagues described 2 patients with NSCLC who had generalized facial edema concomitant to acute kidney injury after receiving pemetrexed.12

We present a case of facial edema preceding acute renal injury in a patient who received single-agent maintenance pemetrexed therapy for stage IV nonsquamous NSCLC after induction therapy with the combination of carboplatin, pemetrexed, and bevacizumab.

A 69-year-old man who previously received treatment with cisplatin, etoposide, and concurrent radiation therapy for stage IIIA nonsquamous NSCLC presented to our oncology clinic with recurrent lung cancer, as demonstrated on a recent positron emission tomography scan. A biopsy confirmed the diagnosis of stage IV metastatic NSCLC involving the adrenal gland, with the lung as the primary site of malignancy.

The patient underwent next-generation genomic testing, which revealed no targetable mutations. The patient’s brain magnetic resonance imaging was negative for brain metastases. Based on complicated social circumstances related to incarceration, combined with clinical recommendations from a local academic referral center, the patient received 6 cycles of carboplatin area under the curve of 5, pemetrexed 500 mg/m2, and bevacizumab 15 mg/kg every 3 weeks. In addition, the patient began to receive a regimen of supportive-care medications, including dexamethasone, vitamin B12, and folic acid.

The chemotherapy combination regimen resulted in a complete response; therefore, the patient was subsequently transitioned to single-agent maintenance therapy with pemetrexed 500 mg/m2 every 3 weeks. The patient did not take dexamethasone as prescribed before starting maintenance treatment with pemetrexed.

The patient had minimal side effects after receiving 15 cycles of single-agent pemetrexed maintenance therapy. After cycle 16 of pemetrexed, the patient was noted to have mild, grade 2 peripheral edema, and an 8.6-lb weight gain, which was attributed to the pemetrexed therapy. The patient’s home medications included atorvastatin, vitamin B12, fluoxetine, folic acid, and ondansetron. No changes were made to these medications with the initiation of maintenance pemetrexed treatment.

The patient’s pertinent medical history included osteoarthritis and pulmonary embolism. A computed tomography (CT) scan with contrast showed no NSCLC disease progression and ruled out the presence of pulmonary embolism. The patient was initiated treatment with furosemide 20 mg orally daily for his peripheral edema, while continuing with pemetrexed therapy.

The subsequent 2 cycles of pemetrexed were uneventful: the patient’s peripheral edema was reduced to grade 1, and he had a weight loss of 6.1 lb. The results of echocardiography and doppler ultrasounds were normal. After cycle 19 of pemetrexed treatment, physical examination revealed that the patient had new grade 1 generalized facial edema. Laboratory studies showed that the patient had mild renal insufficiency compared with baseline (Table). A possible contributing factor to the mild renal insufficiency included the addition of treatment with a loop diuretic (ie, furosemide). 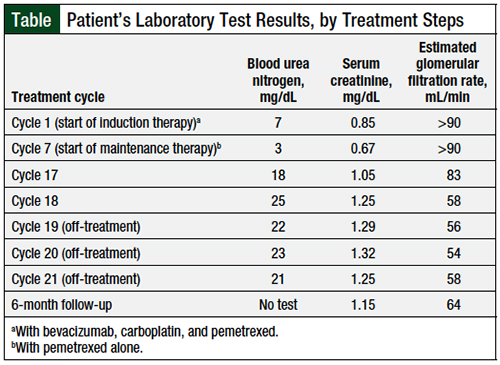 A subsequent CT scan of the chest revealed that the patient continued to have no evidence of NSCLC. Therefore, the decision was made to discontinue treatment with pemetrexed permanently, and to continue monitoring the patient with surveillance and quarterly CT scans.

Pemetrexed is often used as part of a combination therapy for the treatment of NSCLC or mesothelioma, for 4 to 6 cycles. Maintenance therapy follows and may be continued until progression or unacceptable adverse events.1 Based on data in its prescribing information, the incidence of renal injury from pemetrexed monotherapy that has been reported in clinical trials ranges from 0.4% to 0.6%.1

The exact mechanism behind pemetrexed-induced renal injury is not completely understood, and no predictable time frame has been reported for the occurrence of pemetrexed-induced renal injury. However, several case studies have suggested that acute tubular necrosis and interstitial fibrosis could be the cause of the renal injury, and these case studies caution that the combination of intravenous contrast, dehydration, and nephrotoxic medications could also contribute to renal injury.3-7 Therefore, these confounding factors should be evaluated when treatment with pemetrexed is being considered, which may need to be ruled out, as was done with our patient.

Rombolà and colleagues described 2 cases of pemetrexed-induced acute renal injury.7 Similar to our patient, these 2 patients presented with generalized facial edema before renal injury.7 Based on these findings, facial edema may be an early indicator of renal injury in patients receiving long-term pemetrexed therapy. Patients should be closely monitored if they are presenting with the symptom of facial edema.

Our patient’s NSCLC had been in complete remission for more than 11 treatment cycles of pemetrexed; therefore, the decision was made to discontinue treatment. In patients who are receiving pemetrexed in the adjuvant setting, or those who do not reach complete remission, it is prudent to consider the discontinuation of concomitant nephrotoxic agents (ie, nonsteroidal anti-inflammatory medications, angiotensin-converting enzyme inhibitors, aminoglycosides, and cimetidine), minimizing the use of intravenous contrast, increasing hydration, ensuring appropriate urine output, and potentially reducing the dose of pemetrexed based on the grading of pemetrexed.

With the increasing use of pemetrexed therapy, it is important for healthcare providers to be aware of the potential less-common postmarketing adverse events that could occur with maintenance therapy of this medication. One of these events is facial edema, which may be followed by acute renal injury. As shown in our case report, facial edema can occur at any time during pemetrexed treatment, and may be exacerbated by other nephrotoxic agents and dehydration. It is therefore important for oncologists to evaluate patients regularly for any signs of renal deterioration, and to ensure that patients maintain proper hydration and avoid the use of other nephrotoxic agents while receiving pemetrexed.

Author Disclosure Statement
Dr Mattila and Dr Lundberg have no conflicts of interest to report.