BACKGROUND: The process of autologous hematopoietic stem-cell transplant (HSCT) is associated with a risk for complications such as electrolyte abnormalities and atrial fibrillation. Studies have identified risk factors for such complications, including age and cardiac factors, but little research has investigated the role of electrolyte abnormalities in the onset of atrial fibrillation in patients undergoing HSCT.

OBJECTIVE: To evaluate the impact of serum electrolyte abnormalities presenting after autologous HSCT on the risk for atrial fibrillation.

A recent meta-analysis showed that patients with low serum potassium level had a 1.6-fold increased risk for supraventricular arrhythmias, defined as atrial fibrillation or atrial flutter, with increasing age being a significant risk factor.11 Extrapolation of this information to patients undergoing HSCT indicates a high risk for electrolyte abnormalities and potentially for atrial fibrillation, with the highest risk approximately 8 to 10 days after HSCT, a time range that has previously been identified as the electrolyte nadir after HSCT.12

This single-center, retrospective cohort study included patients who underwent autologous HSCT at Avera McKennan Hospital & University Health Center in Sioux Falls, South Dakota, between November 2007 and November 2018. Patients were included if they had an autologous HSCT at the facility within this study period. Patients were excluded from the study if they had documented atrial fibrillation on baseline electrocardiogram (EKG) results.

Serum electrolytes, including potassium and magnesium levels, were collected at baseline and then daily through neutrophil engraftment. If multiple electrolyte levels were drawn in one day, the first level of the day was used for data collection, because repeated laboratory blood tests might have been completed to assess the efficacy of electrolyte replacement. We also collected EKG results at baseline before HSCT and any subsequent EKGs until 1 year after HSCT.

The primary study end point was the presence of atrial fibrillation after HSCT, specifically focusing on the impact of hypokalemia and hypomagnesemia on its onset. EKG results were used to identify atrial fibrillation in patients. Normal serum potassium level was defined as 3.5 mEq/L to 5.1 mEq/L, and normal serum magnesium level was defined as 1.6 mg/dL to 2.6 mg/dL, per laboratory reference range.

The secondary end points included the rate of ICU admission, hospital length of stay, sepsis onset, incidence of mucositis, and C difficile infection. We conducted a subgroup analysis of the patients with atrial fibrillation post-HSCT to examine the rate of recurrence and the method of treatment of atrial fibrillation at 1 year after HSCT.

We used Fisher’s exact test to assess the relationship between categorical variables. A Wilcoxon rank-sum test was used for continuous variables, because of a non-normal distribution of data. In all statistical tests, an effect was considered statistically significant if the P value of its corresponding statistical test was <.05. All statistical computations were performed using R version 3.5.2 (R Foundation; Vienna, Austria).

Serum potassium levels were lower during days 5 to 13 after HSCT in patients who had newly diagnosed atrial fibrillation, as illustrated in the Figure. The mean potassium levels on days 6 to 10 after HSCT were significantly lower in patients who had atrial fibrillation than in the control group (3.39 mEq/L vs 3.54 mEq/L, respectively; P = .0055; Table 2). No significant difference in serum magnesium levels was identified between the 2 cohorts. 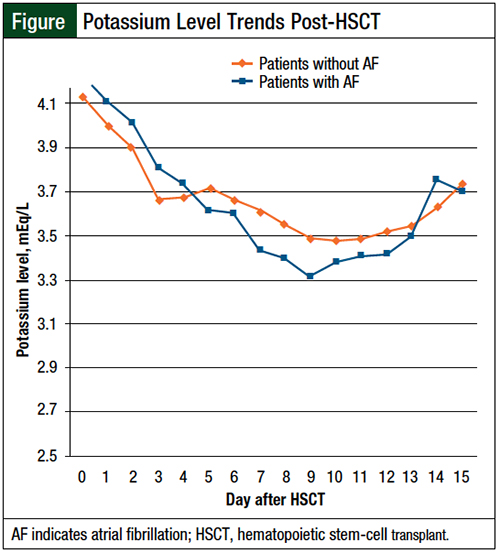 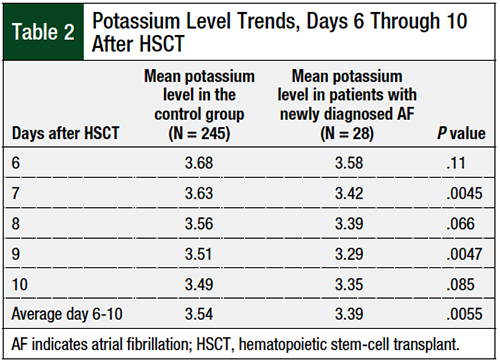 Regarding the secondary end points of the study, patients who had newly developed atrial fibrillation had a higher incidence of sepsis than the control group (57% vs 23%, respectively; P <.001) and ICU admission (46% vs 5.7%; P <.001). Similarly, these patients had a longer hospital stay than the control group (24 days vs 15 days, respectively; P <.001). No significant differences were identified between the cohorts regarding the incidence of mucositis or of C difficile infection (Table 3). 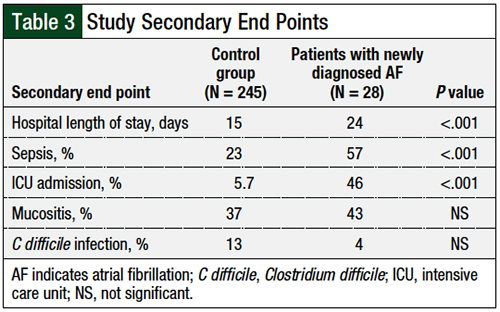 An interesting finding resulted from the secondary end point of 1-year follow-up data for patients with newly developed atrial fibrillation after HSCT. Up to this point, the follow-up for such patients had only been until 30 days after discharge from the original HSCT hospital admission. Of the 28 patients who had atrial fibrillation after HSCT, 15 (54%) had 1-year follow-up data available (Table 4). 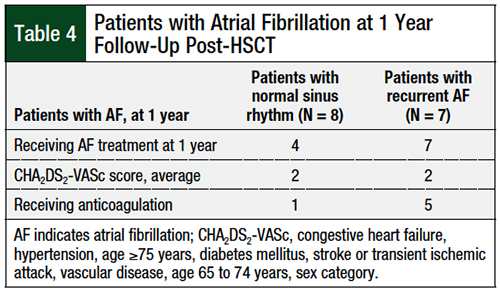 Our results show that 7 of 15 (46.6%) patients either remained in persistent atrial fibrillation or had at least 1 recurrence episode during the follow-up period. This demonstrates that many patients continue to have problems with atrial fibrillation even after the initial 30 days after HSCT.

The findings of this study have encouraged our institution to complete a more thorough cardiovascular evaluation and outpatient monitoring for atrial fibrillation in this patient population. Many patients who undergo autologous HSCT have electrolyte abnormalities as a result. Previous studies have described factors that could contribute to the onset of atrial fibrillation, including increased age and elevated serum creatinine at baseline,1-8 but electrolyte abnormalities after HSCT had yet to be evaluated before this study.

Other cardiac risk factors identified in previous studies, such as a history of cardiac arrhythmias and baseline cardiac dysfunction, could not be evaluated in this study, because of inconsistent reporting within the electronic medical record.2-8 We also chose not to evaluate the receipt of melphalan as a potential risk factor, as was previously identified by Feliz and colleagues,1 because the number of patients who did not receive melphalan in their conditioning regimens was too small to be analyzed. In addition, we found a significant difference in the distribution of various malignancy types between the 2 cohorts. This was thought to be a result of the small sample size of the cohort to have any clinical significance.

In our study, we identified hypokalemia as potentially being associated with an increased risk for atrial fibrillation after HSCT. An identifiable trend in potassium level was seen from day 6 to day 10 after HSCT, when the atrial fibrillation cohort’s serum potassium levels decreased significantly below the other cohort’s levels, as seen in the Figure.

Also of note, the average time for patients to have newly developed atrial fibrillation after HSCT was 8 days, which falls within the window of when electrolytes were at their lowest. The average potassium levels significantly differed between the atrial fibrillation cohort and the control cohort from days 6 to 10 post-HSCT (3.39 mEq/L vs 3.54 mEq/L, respectively; P = .0055).

We could not reach conclusions regarding the impact of hypomagnesemia on the incidence of atrial fibrillation post-HSCT, because the reporting of magnesium levels at our facility was inconsistent compared with potassium levels, which was drawn daily for most patients. Although our results are not powered, the findings show that a closer look at electrolytes in this patient population may be warranted.

The limitations of this study include the evaluation of only patients who had an autologous HSCT, with the exclusion of those who had an allogeneic HSCT. Allogeneic HSCTs were not included because of the overall increased risk for complications related to this type of transplant.13 Considering the small sample size of our study, their inclusion might have skewed the results.

Additional limitations include the retrospective nature of this study, with all data being collected by retrospective chart review. Not all patients had thorough cardiac monitoring during their hospital stay, potentially leading to underreporting of atrial fibrillation. At the time of this study, no standard existed for electrolyte monitoring and replacement protocol at our institution. This resulted in inconsistent reporting and replacement of electrolytes in the patients during their admission.

Although the findings were significant in the analysis of secondary outcomes regarding length of stay, ICU admission, and the onset of sepsis, our conclusions are limited by confounding factors.

We hope that future larger, prospective studies will further analyze the impact of electrolyte abnormalities on the onset of atrial fibrillation in this population.

Our findings showed that hypokalemia correlated with the incidence of atrial fibrillation in patients after autologous HSCT. This supports the implementation of more aggressive electrolyte monitoring and replacement protocols in this patient population. This study also supports the consideration of higher electrolyte target values for patients after autologous HSCT; for example, targeting a serum potassium level of at least 4 mEq/L. 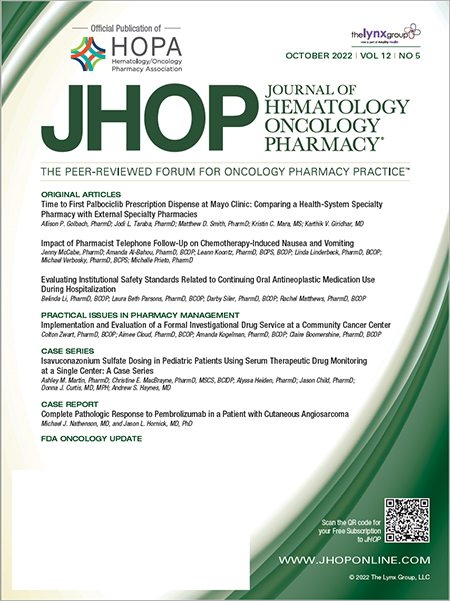