Multiple myeloma is a cancer of plasma cells in the bone marrow that often leads to bone destruction and bone marrow failure.1,2 According to the American Cancer Society, more than 26,800 new cases of multiple myeloma were diagnosed in 2015, and 11,240 deaths were attributed to the disease.3

Although the overall incidence of multiple myeloma continues to increase, the mortality rates associated with this malignancy have declined in the past 20 years.1,6 Specifically, the advent of novel therapeutic options for multiple myeloma, as well as improvements in high-dose therapy and supportive care have contributed to extended survival for this patient population.6

New anticancer drugs and novel combinations have emerged in part as a result of improved understanding of the bone marrow microenvironment and the biology of multiple myeloma.7 Immunomodulators and proteasome inhibitors now represent the cornerstones of initial treatment for multiple myeloma based on their proved ability to enhance the overall response rates and survival.2,7

Because novel agents for multiple myeloma have had a considerable impact on the healthcare budget, understanding their relative cost-effectiveness is important for ensuring efficient use. Overall, 2 recent evaluations of the economics of these new agents in multiple myeloma resulted in similar conclusions.8,9

One of the studies used claims data from more than 2600 US-based patients with multiple myeloma, and found that the 1-year costs of bortezomib-based therapy were similar to the costs of non-novel combinations (approximately $112,000 each), whereas the costs of thalidomide- and lenalidomide-based regimens were significantly higher (approximately $130,500 and $159,200, respectively) than non-novel combinations.8 This study also found that patients taking thalidomide and lenalidomide had higher out-of-pocket costs in light of Medicare Part D’s coverage gap for outpatient drugs.8

The second study modeled the cost-effectiveness of novel agents combined with melphalan and prednisone in patients with newly diagnosed multiple myeloma who were ineligible for a transplantation.9 The researchers concluded that adding bortezomib to melphalan and prednisone was more cost-effective than adding thalidomide or lenalidomide to that regimen.9

Despite strides in the treatment of multiple myeloma, patients will experience disease relapse after initial treatment and multiple lines of therapy are typically required.10

Treatment considerations for patients with relapsed and/or refractory multiple myeloma include the duration of response to previous treatment and the risk for toxicity. Therefore, there is a marked need for additional therapeutic options for this patient population.10

On November 30, 2015, the US Food and Drug Administration (FDA) approved elotuzumab (Empliciti; Bristol-Myers Squibb) for use in combination with lenalidomide and dexamethasone for the treatment of patients with multiple myeloma who have received 1 to 3 previous therapies.11

Elotuzumab is the first monoclonal antibody that targets the signaling lymphocytic activation molecule family (SLAMF) 7 protein, and the second monoclonal antibody approved for patients with relapsed multiple myeloma.11 The approval of elotuzumab was based on a 2-year analysis of the ELOQUENT-2 study, a randomized phase 3 clinical trial that showed a 30% improvement in progression-free survival (PFS) when elotuzumab was added to lenalidomide and dexamethasone compared with lenalidomide plus dexamethasone alone.11-13

Richard Pazdur, MD, Director of the FDA’s Office of Hematology and Oncology Products, said, “We are continuing to learn about the ways the immune system interacts with different types of cancer, including multiple myeloma. Today’s approval is the second monoclonal antibody approved to treat patients with multiple myeloma and works with another approved therapy to provide additional benefit.”11

Elotuzumab is a humanized immunoglobulin (Ig) G1 monoclonal antibody that specifically targets the SLAMF7 protein. SLAMF7 is a receptor present on immune cells, including natural killer cells, plasma cells, and specific immune-cell subsets of differentiated cells within the hematopoietic lineage. Elotuzumab is also expressed on multiple myeloma cells regardless of cytogenetic abnormalities.12

Patients should be premedicated with 4 agents, including dexamethasone; an H1 blocker, such as diphenhydramine; an H2 blocker, such as ranitidine; and ­acetaminophen given 45 to 90 minutes before the elotuz­umab infusion.12

Elotuzumab is available in 300-mg and 400-mg vials, each with a postreconstitution dilution of 25 mg/mL.12

The efficacy and safety of elotuzumab were demonstrated in the ELOQUENT-2 study, a multinational, randomized, open-label, phase 3 study comparing elotuz­umab plus lenalidomide and low-dose dexamethasone with lenalidomide plus low-dose dexamethasone in patients with multiple myeloma who had received 1 to 3 previous therapies, and who had documented disease progression after their most recent therapy.11-13

A total of 646 patients were randomized to the elotuz­umab-based regimen (N = 321) or to lenalidomide plus low-dose dexamethasone alone (N = 325) in 4-week treatment cycles until disease progression or until unacceptable toxicity. Patients randomized to the elotuzu­mab-based regimen received elotuzumab (10 mg/kg intravenously) weekly for the first 2 cycles, followed by every 2 weeks for subsequent cycles. Tumor response assessments were conducted every 4 weeks.12

The demographic and baseline characteristics were similar between the 2 treatment arms in the ELOQUENT­2 trial. The majority of patients had an Eastern Cooperative Oncology Group performance status of 0 or 1 (91%). The patients’ median age was 66 years (range, 37-91 years).12

The majority (75%) of patients enrolled in ELOQUENT-2 had stage I or stage II multiple myeloma according to the International Staging System; 21% of patients had stage III disease. Cytogenetic abnormalities of deletion 17p and t(4;14) were documented in 32% and 9% of patients, respectively.12

Patients received a median of 2 previous therapies, including bortezomib (70%), stem-cell transplantation (55%), melphalan (65%), thalidomide (48%), and lenalidomide (6%).12 Overall, 65% of patients had relapsed multiple myeloma (ie, disease that progressed after more than 60 days from their last therapy), and 35% of patients had disease that was refractory to their previous regimen.12

The PFS and overall response rates were significantly improved in patients with relapsed and/or refractory multiple myeloma who received the elotuzumab-based regimen compared with patients who received lenalidomide plus low-dose dexamethasone alone (Table 1).12 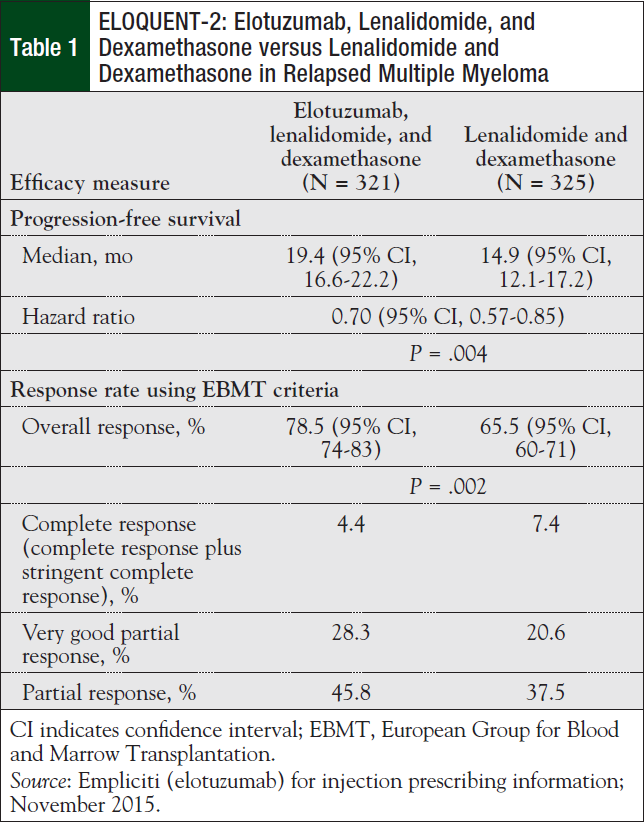 The median PFS was 19.4 months among the elotuz­umab-based regimen cohort compared with 14.9 months for the lenalidomide plus dexamethasone group, a significant difference (HR, 0.70; 95% confidence interval, 0.57-0.85; P = .004).12 After 2 years, 41% of patients had PFS in the elotuzumab-based arm, and 27% of patients had PFS in the lenalidomide plus dexamethasone arm.12

The overall response rate in the elotuzumab-based arm was 79% compared with 66% in the lenalidomide plus dexamethasone group, representing a significant difference (P = .002).12

The extended 3-year follow-up data from ELOQUENT-2 demonstrated that the elotuzumab-based regimen delayed the need for subsequent therapy by a median of 1 year compared with lenalidomide plus dexamethasone alone.14,15 The prespecified interim analysis of the overall survival data showed a positive trend in favor of the elotuzumab-based regimen, but the results did not reach significance. Patients in the ELOQUENT-2 trial will continue to be followed.14,15

Patients in the elotuzumab-containing arm of the ELOQUENT-2 study received a median of 19 treatment cycles compared with 14 treatment cycles in the lenalidomide plus dexamethasone group (minimum follow-up, 2 years).12

Serious adverse reactions were reported in 65% of patients who received the elotuzumab-based regimen, and in 57% of patients who received lenalidomide plus dexamethasone.12 The most frequent serious adverse reactions in the elotuzumab arm compared with the lenalidomide plus dexamethasone arm included pneumonia (15% vs 11%, respectively), pyrexia (7% vs 5%), pulmonary embolism (3% in both arms), acute renal failure (3% vs 2%), anemia (3% vs 2%), and respiratory tract infection (3% vs 1%).12

Laboratory abnormalities (grade 3 or 4) that occurred at a frequency of ≥15% in the elotuzumab arm and at a rate of ≥5% more than in patients receiving lenalidomide plus dexamethasone included lymphopenia (77% vs 49%, respectively), leukopenia (32% vs 26%), and hyperglycemia (17% vs 10%).12 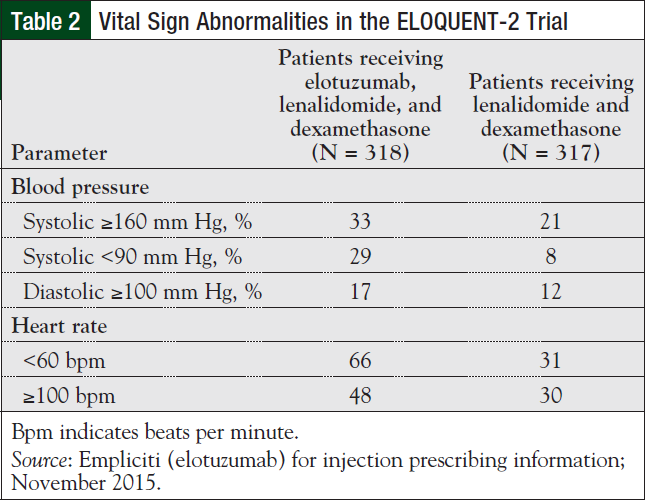 Premedications should be administered before each elotuzumab infusion. If a grade ≥2 infusion reaction occurs, the infusion should be interrupted and medical management should be instituted.12

Infections. Infections were reported in 81% of patients receiving elotuzumab; treatment discontinuations because of infections occurred in 3.5% of patients in the elotuzu­mab arm. Patients should be monitored for infections.12

Interference with determination of complete response. Elotuzumab, a humanized IgG kappa monoclonal antibody, can be detected on serum protein electrophoresis and immunofixation assays used to monitor endogenous M-protein levels. The determination of complete response and disease progression can be affected in patients with IgG kappa myeloma protein.12

Pregnancy. There are no studies with elotuzumab in pregnant women to inform any drug-associated risks.12

Lactation. Breastfeeding is not recommended while receiving elotuzumab therapy.12

Pediatric use. The safety and effectiveness of elotuz­umab have not been established in pediatric patients.12