OBJECTIVE: To compare the efficacy and safety of cyclophosphamide- and etoposide-based chemomobilization regimens in patients with lymphoma undergoing autologous HCT.

METHODS: This single-center retrospective study evaluated patients who received chemomobilization between September 1, 2016, and August 31, 2019, with a single dose of cyclophosphamide 2 g/m2 or etoposide 300 mg/m2 daily for 2 days. All patients received granulocyte colony-stimulating factor starting 24 hours after chemotherapy, with or without plerixafor, per an institutional algorithm. The primary end point was the rate of successful stem-cell collection of ≥2 × 106 CD34+ cells/kg in ≤2 apheresis sessions. The secondary end points included the rate of optimal stem-cell collection (4 × 106 CD34+ cells/kg in ≤2 apheresis sessions); time between chemomobilization and first apheresis session; rate of plerixafor use; incidences of febrile neutropenia and hemorrhagic cystitis; number of emergency department visits and hospital admissions; and the time to neutrophil and platelet engraftment.

RESULTS: No differences in baseline characteristics were found between patients receiving cyclophosphamide (N = 40) and those receiving etoposide (N = 38). Cyclophosphamide was noninferior to etoposide in the collection of ≥2 × 106 CD34+ cells/kg in ≤2 apheresis sessions, because all patients met the primary end point (difference, 0%; 90% confidence interval [CI], –5.5%-5.7%). Cyclophosphamide was also noninferior to etoposide in the secondary end point of optimal collection of ≥4 × 106 CD34+ cells/kg in ≤2 apheresis sessions (difference, 8.7%; 90% CI, –6.4%-23%). The rates of complications, time between chemomobilization and first apheresis, and time to neutrophil and platelet engraftment were similar between the groups.

Autologous hematopoietic-cell transplant (HCT) has been a mainstay in the treatment of patients with relapsed lymphoma for decades.1 Before autologous HCT, adequate mobilization and collection of hematopoietic cells are critical to ensuring successful stem-cell rescue after the administration of high-dose chemotherapy.1 The reinfusion of ≥2 × 106 CD34+ cells/kg reduces the risk for graft nonresponse and improves the likelihood of adequate neutrophil and platelet engraftment, with increased CD34+ cell doses associated with faster neutrophil and platelet engraftments.2-4

Mobilization is the process of stimulating production of CD34+ multipotent stem cells from the bone marrow and subsequently releasing them into the peripheral blood before apheresis; however, sometimes an adequate cell dose is not collected.5 Chemomobilization involves the administration of chemotherapy in addition to granulocyte colony-stimulating factor (G-CSF) and may result in greater CD34+ stem-cell collection yields than with G-CSF alone.5 Furthermore, plerixafor may be given as part of the chemomobilization strategy to improve stem-cell collection yield.2,3,5

The University of North Carolina Medical Center has found that the implementation of an algorithm-based approach to plerixafor utilization in the setting of chemomobilization, driven by CD34+ cell count and collection goals, is a favorable and cost-effective approach; however, institutional mobilization protocols for autologous transplantation may vary.5,6

No consensus exists about the optimal cyclophosphamide dose for chemomobilization; doses as low as 1 to 1.5 g/m2 have been used in patients with lymphoma to collect the minimum number of CD34+ cells required to proceed to transplant.5,8,9 Higher doses of cyclophosphamide (3-7 g/m2) have also been used and have been associated with higher CD34+ cell yields and lower nonresponse rates, but with increased adverse events and costs.2,5

Our institution selected a conservative, 1-time dose of 2 g/m2 administered intravenously, with hydration and mesna support, in an attempt to minimize the risk for cyclophosphamide-related adverse drug reactions, such as hemorrhagic cystitis and prolonged neutrophil and platelet recovery, without compromising successful stem-cell collection. Etoposide- and cyclophosphamide-based chemomobilization regimens are associated with increased hospitalizations for neutropenic fever compared with G-CSF–based mobilization alone.3,10

The goal of this noninferiority study was to compare the efficacy and adverse reactions profiles of cyclophosphamide and etoposide to identify a preferred chemomobilization agent for future use at our institution.

This was a single-center, retrospective analysis of patients with lymphoma who were undergoing cyclophosphamide- or etoposide-based first mobilization before autologous HCT between September 1, 2016, and August 31, 2019. Patients were included if they were aged ≥18 years at the time of chemomobilization, and had received a single dose of either cyclophosphamide 2 g/m2 intravenously or etoposide 300 mg/m2 intravenously, daily, for 2 doses as mobilizing chemotherapy.

Patients who received cyclophosphamide-based mobilization also received 3 IV sodium chloride 0.9% 500-mL boluses: the first 2 given before and after the cyclophosphamide dose, and the third given the next day. Patients received G-CSF 10 mcg/kg subcutaneously, daily, which started at least 24 hours after the last dose of chemotherapy and continued until the completion of apheresis.

Per the institutional protocol, all patients return to the clinic the day after chemotherapy to receive information regarding chemotherapy schedule, chemotherapy side effects, G-CSF schedule, G-CSF side effects, and G-CSF administration technique, and to receive their first dose of home supply of G-CSF. Day 1 was defined as the date the patient received the first dose of chemotherapy. At day 9, a white blood cell (WBC) count was obtained, and if the WBC count was >2 × 109/L, then a CD34+ cell count was obtained. If the CD34+ cell count was ≥20/mcL, then the patient proceeded with apheresis.

The duration of posttransplant hospitalization and the time to neutrophil and platelet engraftment after autologous HCT were hypothesis-generating end points to ensure that changing chemomobilization agents did not have any unanticipated impact on the transplant course. Although no differences were expected, even slight differences in the duration of hospitalization or engraftment timing between the 2 groups would have spurred the need for additional evaluation to determine whether adverse events related to a specific chemomobilization agent were a contributing factor, which may have led our institution to favor one agent over another.

Descriptive statistics were used to summarize the baseline patient characteristics and clinical outcomes. A two 1-sided test was used to assess whether cyclophosphamide is inferior to etoposide in the rate of successful stem-cell collection. Agresti-Caffo 90% confidence intervals (CIs) are reported for the difference in proportions. Cyclophosphamide was considered noninferior to etoposide if the resulting CIs were higher than the noninferiority threshold of –10%. Superiority tests were used to compare other variables between the drug groups. Continuous variables were analyzed using a 2-sided t-test or a Mann-Whitney U test as appropriate, and categorical data were assessed using a Pearson’s chi-squared test or a Fisher’s exact test as appropriate.

The times to neutrophil and platelet engraftments were evaluated using a log-rank test. Assuming estimated proportions of 95% and 90% and a noninferiority margin of 10% in the primary end point, a test of noninferiority required a sample size of at least 38 patients per treatment group for 80% power (type I error rate of 5%). All statistical testing was 2-sided, with an a priori significance level of 0.05 (P <.05). All statistical analyses were performed using GraphPad Prism version 8.0 (GraphPad Software, Inc; La Jolla, CA) and R for Windows version 3.6.3 using the DescTools package.

A total of 79 patients were initially identified based on the study’s inclusion criteria. One patient received cyclophosphamide at a dose of 4 g/m2 and was subsequently excluded from analysis. The baseline characteristics, including age, sex, lymphoma diagnosis, and the time from the last chemotherapy to the initiation of chemomobilization, were balanced between the cyclophosphamide and etoposide groups (Table 1). 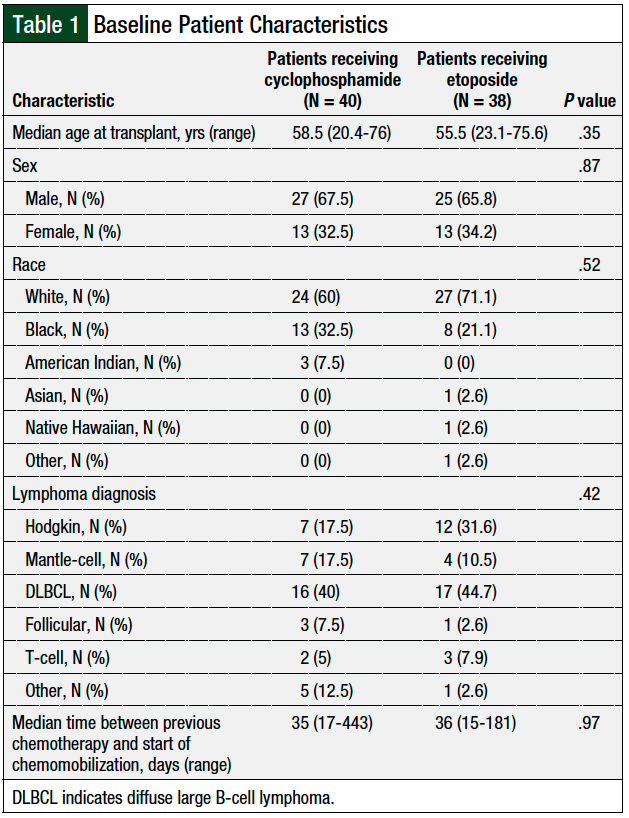 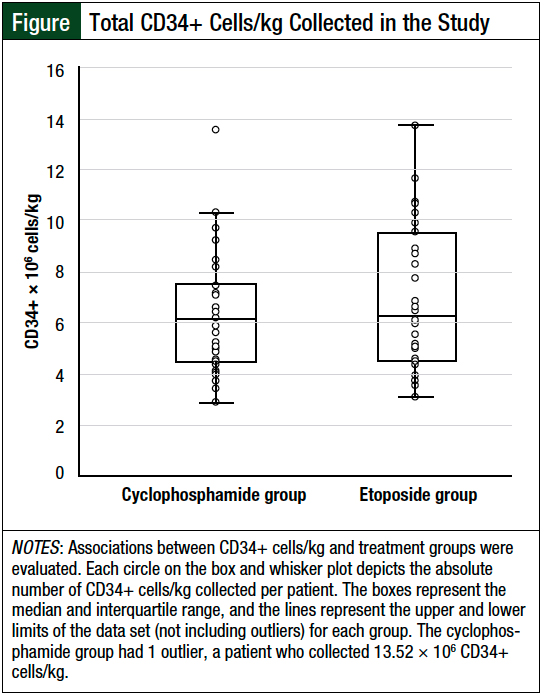 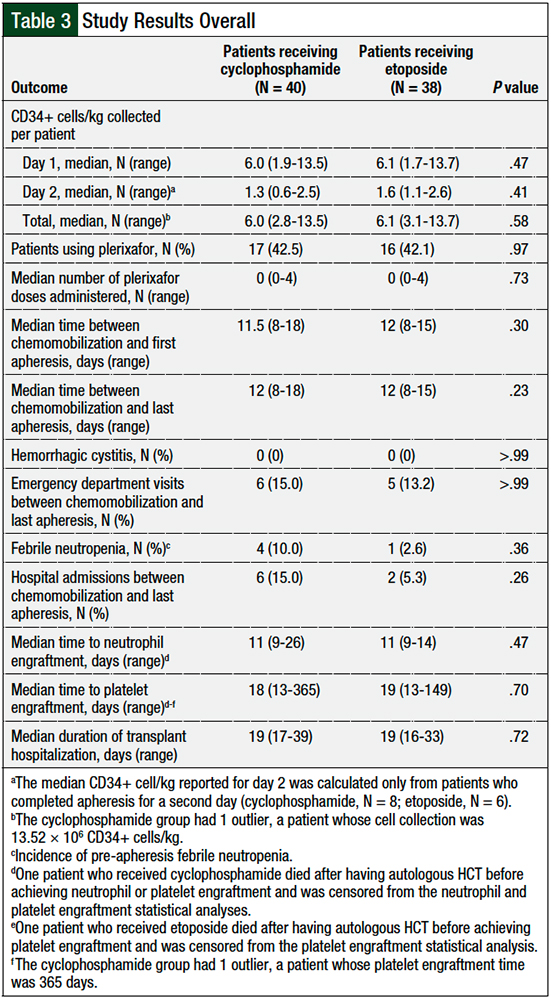 Hospitalizations in the cyclophosphamide group resulted from fever (N = 4) and syncope (N = 2); in the etoposide group hospitalizations were caused by hypoxia (N = 1) and gastrointestinal bleeding (N = 1).

Mobilization and collection of an adequate cell dose before autologous HCT are essential for patients with lymphoma, given that poor mobilization is predictive of reduced survival.13,14 The optimal drug and dose for successful mobilization have not been clearly established. One prospective observational study of 79 patients with non-Hodgkin lymphoma (NHL) examined the use of cyclophosphamide 4 g/m2 and showed that more than 80% of patients had a successful collection of ≥1.5 × 106 CD34+ cells/kg in a single apheresis session.15 However, 21.5% of patients in that study were aged ≥60 years, and the rate of neutropenic fever was 53% in those patients and 45% in patients aged <60 years.15

Etoposide has also proved effective for chemomobilization.7 A retrospective study examining patients between 2004 and 2010 evaluated etoposide 375 mg/m2 daily for 2 days and had results comparable to our study results.7 The researchers observed that 159 patients collected a median of 6.2 × 106 CD34+ cells/kg, with 94% of patients collecting >2 × 106 CD34+ cells/kg, and only 6% of patients required admission during the mobilization period.7 The dose of etoposide used for chemomobilization also affects the rates of efficacy.

A nonrandomized, prospective cohort study with 63 patients undergoing chemomobilization, 31 of whom had lymphoma, examined high-dose etoposide ranging from 1600 to 2000 mg/m2.17 The median CD34+ cell collection ranged from 4.7 × 106 to 6.5 × 106 CD34+ cells/kg. However, 37% of the patients were hospitalized after chemomobilization, with sepsis being the primary reason for hospitalization. The hospitalization rate was significantly lower in patients receiving 1600 mg/m2 of etoposide than in those receiving 2000 mg/m2 of etoposide (19% vs 50%, respectively; P = .03), but the incidence was still higher than the rates in our study.17

The efficacy outcome of mean CD34+ cells collected favored the etoposide group compared with the cyclophosphamide group (11 × 106 cells/kg vs 6.3 × 106 cells/kg, respectively; P = .004), but the safety analysis was similar between the 2 groups. Febrile neutropenia occurred in 7.3% of patients in the etoposide group, whereas 5.4% of patients in the cyclophosphamide group had serious adverse events, including 1 case of hemorrhagic cystitis and 1 case of dilated myocardiomyopathy.18

Because our institution administers cyclophosphamide and IV hydration to patients in the outpatient setting, our results did not demonstrate the same increase in cyclophosphamide-related hospitalization rates. Furthermore, administering a single dose of cyclophosphamide instead of multiple daily etoposide infusions decreases the total amount of time a patient spends in a clinic.

The lower dose of cyclophosphamide 2 g/m2 used in our study is effective and safe compared with a dose of cyclophosphamide 4 g/m2 used in previous studies.15,19 Those studies reported higher rates of neutropenic fever than was observed in our study, although direct comparisons are not possible because of differences in trial design and study population.15,19 The higher dose of etoposide used in these studies might have contributed to the difference in CD34+ cells collected compared with our study.15,19

In our retrospective study, a single dose of only cyclophosphamide 2 g/m2 was used to quantify efficacy and safety compared with our institution’s previous standard of etoposide-based chemomobilization and was noninferior to etoposide. The patients in the etoposide and cyclophosphamide groups were evenly matched, and patients with a variety of lymphoma diagnoses were included.

Our study had several limitations. Because of the retrospective nature of this study, we extracted data via a manual chart review, which is limited by the extent to which information is documented in the electronic medical record.

Data surrounding the exact timeline of G-CSF initiation after the last dose of chemotherapy were not collected, although all patients at our institution always receive their first dose of G-CSF at a clinic appointment, where injection technique can be observed by a registered nurse.

Furthermore, our algorithm for plerixafor use, WBC count, and CD34+ cell count monitoring is institution-specific, thus variability between the institutional protocols may affect the results.

Our data could also be limited by unidentified confounders, which is inherent to this study’s retrospective design. No efficacy or safety outcomes were significantly different between the cyclophosphamide and etoposide groups in our study, and all patients had successful chemomobilization collections based on accepted definitions established in the literature.3-5

Our results should be confirmed in a larger randomized, controlled study that directly compares the efficacy and safety outcomes of a single dose of cyclophosphamide 2 g/m2 with etoposide 300 mg/m2 daily for 2 days when used for chemomobilization in patients with lymphoma.

Acknowledgments
We would like to thank Daniel J. Crona, PharmD, PhD, CPP, and Allison M. Deal, MS, for their assistance with statistical test choice and confirmation of results.